Putin and Trump: The strongman and the wanna-be 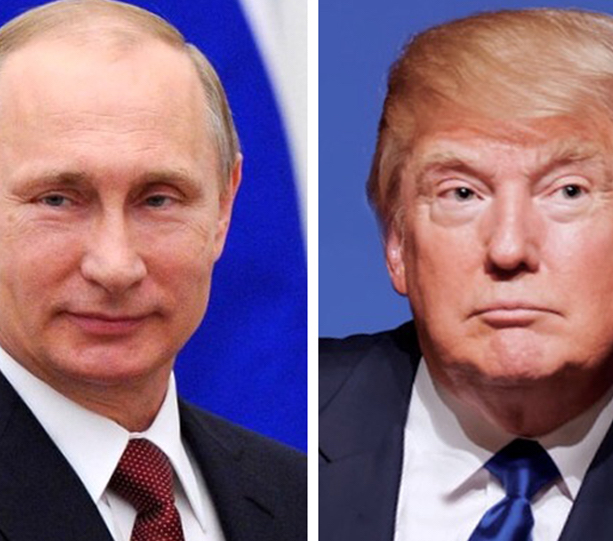 Republican Donald Trump made headlines in the last presidential debate when he ominously declared that Democrat Hillary Clinton would “be in jail” if he’s elected to the presidency. Threats to a political opponent are more typically issued by dictators that American politicians condemn – but Trump’s words really aren’t a surprise.

For years, Trump has openly admired Russian strongman Vladimir Putin, who has steadily ramped up his dictatorial tactics against opponents within Russia, as well as his aggression against neighboring countries. If we compare Putin’s record and Trump’s words, it’s striking how much the two seem to think alike on issues that are critical to American democracy and national security.

Putin has called the internet a “CIA project” and the Russian government has passed several laws that limit the public’s access to information online. One law allows the government to block access to any site without a court order and has been used to suppress websites critical of Putin and his annexation of the Crimea region of Ukraine.

In shutting off access to political opponents’ websites, the state regulatory agency Roskomnadzo said: “These sites contain incitement to illegal activity and participation in public events held in violation of the established order.”

Trump has said he would be in favor of closing “parts of the Internet,” as a way to fight terrorism:

This is the tactic of closed nations like North Korea, which shuts off access entirely outside its borders, and controlling nations like China, which limits access to social media networks and some websites. It is not a strategy to be embraced by a nation that secured the rights to free speech and a free press – and thus, information – in the First Amendment to the Constitution. Democracies around the world join the United States in policies of open access to information; several go so far as to explicitly call access to the Internet a basic human right.

FREEDOM OF THE PRESS

Under Putin’s rule, the government has raided the offices of private media companies and had a hand in firing journalists who published stories critical of the Russian leader. Some critical journalists have even ended up dead.

At least 34 journalists have been murdered while Putin has been in power. While he hasn’t been tied directly to any of their deaths, Politifact quotes Nina Ognianova of the Committee to Protect Journalists as saying that journalists covering corruption, human rights abuses, organized crime, and official wrongdoing can be “slain with impunity in Putin’s Russia.”

“Their killers are emboldened to act by an administration that marginalizes them, isolates them, and downplays their role in society.”

Trump said in February that he plans to target news media organizations through changing libel laws:

“We’re going to open up those libel laws. So when The New York Times writes a hit piece which is a total disgrace or when The Washington Post, which is there for other reasons, writes a hit piece, we can sue them and win money instead of having no chance of winning because they’re totally protected.”

Trump’s attacks on the media have increased in recent weeks since The New York Times published pages from his 1995 tax returns and reported accounts from women who claim Trump sexually assaulted them, and the Washington Post reported on an Access Hollywood video that included Trump bragging about sexually assaulting women.

“That’s because libel law sets much higher standards of proof for plaintiffs who are famous people or public officials. When it comes to defamation litigation, public figures like Mr. Trump have to establish that not only a statement was false and defamatory, but also published with actual malice.”

But Trump doesn’t just want to punish media for the publishing of stories he doesn’t like. He has also restricted access to journalists trying to report on him. Several news organizations were denied access to Trump events over the summer, including The Washington Post.

Putin has propelled the Russian propaganda machine into high gear since Russia’s 2008 incursion into the former Soviet state of Georgia, according to a June 2016 report by the RAND Corporation:

“The country has effectively employed new dissemination channels and messages in support of its 2014 annexation of the Crimean peninsula, its ongoing involvement in the conflicts in Ukraine and Syria, and its antagonism of NATO allies. The Russian propaganda model is high-volume and multichannel, and it disseminates messages without regard for the truth. It is also rapid, continuous, and repetitive, and it lacks commitment to consistency. Although these techniques would seem to run counter to the received wisdom for successful information campaigns, research in psychology supports many of the most successful aspects of the model. Furthermore, the very factors that make the firehose of falsehood effective also make it difficult to counter. Traditional counterpropaganda approaches will likely be inadequate in this context.”

Trump has also adopted a “firehose of falsehood” approach in his speeches, interviews and debates, at times overwhelming fact-checking journalists. He tends to spew a mix of lies, half-truths and opinions in a steady stream, and he repeats falsehoods over and over. For example, Trump pushed the racist birther movement for years until finally acknowledging in September that President Obama was born in the United States (five years after Obama produced his long-form U.S. birth certificate). And then Trump falsely claimed that the birther movement had started in Clinton’s campaign. More recently, he has denied U.S. intelligence claims that Russia is behind the hacks into the Democratic National Committee – and he has even claimed that the presidential election is rigged, even though his own running mate Mike Pence disagrees.

All of these false statements are designed to undermine Americans’ confidence in their democracy – a strategy that the nonprofit Media Matters for America says is straight out of “the Kremlin’s propaganda playbook.”

In July 2016, Putin cited terrorism as the reason for a crackdown on evangelism outside churches. Newsweek reported the law restricts religious proselytizing, imposing hefty fines. The law exempts the Russian Orthodox Christian Church, but opponents point out that exemption only covers the Moscow Patriarchate, which critics say has been entangled with the government since Soviet times.

The president of the National Religious Broadcasters group, Dr. Jerry Johnson, said: “Following a pattern of other human rights abuses, Vladimir Putin’s Russia is criminalizing a central duty for all followers of Christ – sharing our faith. “

In just one example, Putin kept political opponent and Russian oligarch Mikhail Khodorkovsky in prison for 10 years before releasing him for apparent humanitarian reasons in 2013. Khodorkovsky, who now lives in Switzerland, became politically active again last year in response to Russia’s invasion of Ukraine. The Russian government responded by issuing an international arrest warrant for Khodorkovsky for the 1998 murder of a Siberian mayor.

Trump made it clear in the last debate that Clinton would be prosecuted and in jail if he wins the election, words that echoed chants from his political rallies and the Republican convention to “Lock her up!”

Putin has insisted that the 2014 invasion of Ukraine and annexation of Crimea was righting a Soviet-era wrong: “Crimea has always been an integral part of Russia in the hearts and minds of people.”

Since annexing Crimea, which the West has refused to recognize, Russia has fostered a pro-Russia rebellion in eastern Ukraine, keeping the former Soviet republic unstable.

Trump revealed his ignorance about Russian aggression in July in an exchange with ABC’s George Stephanopoulos:

“O.K., well, he’s there in a certain way,” Mr. Trump replied. “But I’m not there. You have Obama there. And frankly, that whole part of the world is a mess under Obama with all the strength that you’re talking about and all of the power of NATO and all of this. In the meantime, he’s going away. He take — takes Crimea.”

Trump’s campaign went so far as to rewrite the Republican Party’s platform to soften its official position on Ukraine.

Finally, Trump has followed Putin’s lead in celebrating the strength of authoritarian values and powers. Gideon Rachman in The Financial Times (paywall) points out the similarities between Putin and Trump, as well as with other dictators around the world:

“All these men have promised to lead a national revival through the force of their personalities and their willingness to ignore liberal niceties. In many cases, the promise of decisive leadership is backed up by a willingness – sometimes explicit, sometimes implied – to use illegal violence against enemies of the state …”

“The alarming truth is that the impact of strongman leaders is rarely confined within national borders. All too often, the undercurrent of violence that they introduce into domestic politics spills over onto the international stage.”

Up next: PutinTrump.org will be watching the final presidential debate Wednesday night and responding when the candidates address the critical national security issues that we are watching closely. Follow us on Twitter and Facebook for the latest.