Yes, there are plenty of Russia-Putin-Trump connections 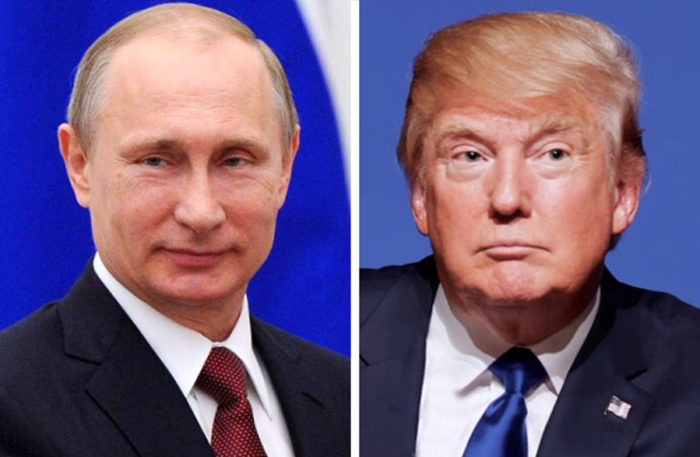 Item: Law enforcement officials say that none of the investigations so far have found any conclusive or direct link between Mr. Trump and the Russian government.

Someday, this will likely be one of those stories for which the venerable New York Times will feel compelled to apologize for getting it so wrong. Unfortunately, it occurs at a critical time when the nation’s voters need investigative and truth-telling skills more than ever. Vladimir Putin, Donald Trump and the FBI may all say there are no direct links – but that’s simply not believable given all the other evidence. Thank goodness there are plenty of other valid sources willing to call a puppet a puppet when they see a puppet.

PutinTrump.org has compiled the following timeline of documented ties demonstrating Trump’s connections with Russia stretching back 30 years. The timeline also includes more recent disclosures that point to an ongoing relationship. These connections are the other side of Russia’s affiliation with Trump, which include Russia’s confirmed hacking and interference in the U.S. election on Trump’s behalf.

We continue to believe this is the most serious issue in a very serious election: The fact that one candidate and the United States’ leading adversary share a worldview, finances, staff, and an authoritarian approach appears to looks like what could be a dangerous alignment in power.

A review of the documented connections between Russia and Trump:

1986: Trump explores partnering with the Soviet government on real-estate development opportunities in Moscow. An excerpt from Trump’s memoir, The Art of the Deal:

“A prominent businessman who does a lot of business with the Soviet Union calls to keep me posted on a construction project I’m interested in undertaking in Moscow. The idea got off the ground after I sat next to the Soviet ambassador, Yuri Dubinin, at a luncheon. … One thing led to another and now I’m talking about building a large luxury hotel, across the street from the Kremlin, in partnership with the Soviet government.”

1987: Trump travels to Russia to investigate luxury-hotel opportunities in person, but the developments never happened. From The Art of the Deal:

“We toured half a dozen potential sites for a hotel, including several near Red Square. We stayed in Lenin’s suite at the National Hotel, and I was impressed with the ambition of the Soviet officials to make a deal.”

1997: Trump tries to get an enormous statue of Christopher Columbus placed on the Hudson River – a gift he claimed was from the Russian government. The statue ended up in Puerto Rico after several U.S. cities rejected it, according to the Financial Times (paywall).

2007: Donald Trump praises Putin in a conversation with Larry King on CNN: “Look at Putin – what he’s doing with Russia – I mean, you know, what’s going on over there. I mean this guy has done – whether you like him or don’t like him – he’s doing a great job. In rebuilding the image of Russia and also rebuilding Russia period. Forget about image.”

2008: Donald Trump Jr. brags about the Trump empire’s business dealings with Russian investors in a speech at a real-estate conference: “Russians make up a pretty disproportionate cross-section of a lot of our assets. We see a lot of money pouring in from Russia.”  In the speech, Trump Jr.  revealed that he had traveled to Russia six times in the previous 18 months. But, he said, Russia presented enormous challenges. “As much as we want to take our business over there, Russia is just a different world. It is a question of who knows who, whose brother is paying off who. . . . It really is a scary place.”

2008: Trump licenses his name to a group that includes Russian investors to develop the Trump Soho hotel in New York. Part of the group includes Bayrock, a developer with deep ties in the former Soviet Union, reports The Financial Times (paywall). An ABC News investigation found court filings showing that a partner in Trump Soho recruited financing from investors in Russia and Kazakhstan. During a meeting assembled to boost interest in the property in Russia, Trump was quoted telling Russian journalists: “I really like Vladimir Putin. I respect him. He does his work well. Much better than our Bush.”

2013: Trump’s Miss Universe Pageant is staged in Moscow. Trump earned a cut of the profits when a Russian oligarch paid to host the pageant, ABC News found. At the time, Trump tweeted a personal invitation to Putin to attend, and afterward bragged about hobnobbing with Russia’s elite: “Almost all of the oligarchs were in the room,” Trump told Real Estate Weekly.

2013: Trump Toronto opens, with the backing of Russian-born investors. Less than four years later – just this week – the bankrupt venture was placed in receivership.

2016, throughout the presidential campaign: From January until the election, whenever he is questioned about his ties to Russia, Trump repeatedly makes favorable comments about Putin. He also repeatedly says nobody knows who hacked into the Democratic National Committee and John Podesta emails, although intelligence officials have confirmed that it was Russia and have even briefed Trump on that fact. This deliberate effort to constantly excuse and extol Russia worries U.S. allies.

July 2016: Trump encourages Russian hackers to find Hillary Clinton’s missing emails. “Russia, if you’re listening, I hope you’re able to find the 30,000 emails that are missing, I think you will probably be rewarded mightily by our press.”

August 2016: Campaign manager Paul Manafort quits amid controversy over his work for the pro-Putin former president of Ukraine, and because the New York Times reports that he made $12.5 million working for the former Ukraine government ousted by popular uprising.

September-October 2016: Politico magazine reports that Carter Page, an American businessman cited by Trump as one of his foreign policy advisers, had financial ties to Russia and had recently visited Moscow. In October, Yahoo News reported that US intelligence officials were probing the links between Page and senior Russian officials. (Page has called accusations against him “garbage.”)

October 31, 2016: Under the headline, “A Veteran Spy Has Given the FBI Information Alleging a Russian Operation to Cultivate Donald Trump,” Mother Jones reports on a memo from the former spy that states: “Russian regime has been cultivating, supporting and assisting TRUMP for at least 5 years. Aim, endorsed by PUTIN, has been to encourage splits and divisions in western alliance.” The memo maintained that Trump “and his inner circle have accepted a regular flow of intelligence from the Kremlin, including on his Democratic and other political rivals.” It claimed that Russian intelligence had “compromised” Trump during his visits to Moscow and could “blackmail him.” It also reported that Russian intelligence had compiled a dossier on Hillary Clinton based on “bugged conversations she had on various visits to Russia and intercepted phone calls.”

October 31, 2016: A report in Slate focuses on an alleged covert communication channel between the Trump Organization, Trump’s business fiefdom, and Alfa Bank, a Russian institution with ties to the Russian oligarchy and Putin. The story is complex and often difficult to understand, based on arcane analysis of even more obscure data, but it suggests there could be an elaborate back channel that showed spikes in activity right around key moments in the election, but was quickly closed when reporters began making inquiries into it.