Kasparov warns that Putin will always be a ‘scorpion’ 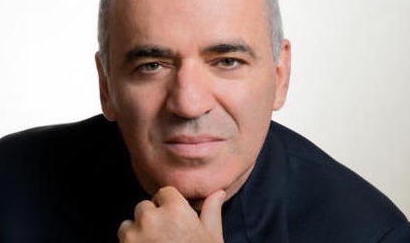 One of the strongest voices in the American media warning about the enigmatic collusion between Donald Trump and Vladimir Putin has been Garry Kasparov, a young Russian chess grandmaster who became World Chess Champion in 1985 at age 22.  He retired from chess competition in 2005 and has devoted himself to helping form a civil political opposition in Russia, even attempting to run for president against Putin in a bid that was blocked by official obstruction.

Kasparov is now a New York-based author and chairman of the Human Rights Foundation. His most recent book is Winter Is Coming: Why Vladimir Putin and the Enemies of the Free World Must Be Stopped. The book recounts Russia’s descent back into dictatorship under Putin, a former KGB lieutenant colonel who became President of the Russian Federation in 1999. Kasparov is critical of Western democracies for not standing up to Russian aggression, while trying to appease a dictator who remains a potent threat to political liberty and the modern world order.

Below are three brief excepts from Winter is Coming, published by PublicAffairs,  followed by a link to a fuller excerpt, used by permission of the author:

As I have said for years, it is a waste of time to attempt to discern deep strategy in Mr. Putin’s actions. There are no complex national interests in his calculations. There are only personal interests, the interests of those close to him who keep him in power, and how best to consolidate that power. Without real elections or a free media, the only way a dictator can communicate with his subjects is through propaganda and the only way he can validate his power is with regular shows of force…

But blaming Putin for invading Ukraine — for annexing Crimea, for giving advanced surface-to-air missiles to separatists — is like blaming that proverbial scorpion for stinging the frog. It is expected. It is his nature. Instead of worrying about how to change the scorpion’s nature or, even worse, how best to appease it, we must focus on how the civilized world can contain the dangerous creature before more innocents die…

As always when it comes to stopping dictators, with every delay the price goes up. Western leaders have protested over the potential costs of action in Ukraine at every turn only to be faced with the well-established historical fact that the real costs of inaction are always even higher. Now the only options left are risky and difficult, and yet they must be tried. The best reason for acting to stop Putin today is brutally simple: it will only get harder tomorrow.

Excerpt from Chapter 10 of Winter is Coming.